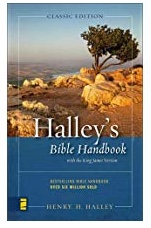 It was brought to our attention that the later edition of Halley’s Bible Handbook (which was quoted on this site under “Online Resources”) was changed in the Fourth Day section. However, editions 1-24 affirm a Young Biosphere perspective. Here is the original text:

Sun, Moon, and Stars. They must have been created ‘in the beginning.’ On the ‘first day’ their light must have penetrated the earth’s mists (Gen.1:3), while they themselves were not visible. But now, due to the lessened density of the clouds, as a result of further cooling of the earth [and intervention of the Creator] they became visible on earth. Seasons came when the earth’s surface ceased to receive heat from within, and became dependent on the Sun as its only source of heat.

The page under Online Resources has been changed to this original edition.