“The Bleeding World of Noah’s Flood”

God created a perfect world. After the six day creation of living things (the biosphere) God described His world as “very good” (Genesis 1: 31). From that we MUST infer that there were no wild fires, floods, earthquakes, volcanoes, hurricanes, no asteroid impacts, no disease, no accidents, no death until after the fall of man. Perfect weather and fairly even temperatures prevailed from pole to pole, with only nightly mists watering the earth. On every land mass on earth and spilling over into the fresh water ocean were thick forests and vast masses of algae and plankton. There were no desolate areas and no rain or snow. The world was like a terrarium. Natural sunscreens prevailed in the atmosphere. The entire Edenic world was perfect and beautiful. Sharks and spiders and tigers were all friendly. For creatures possessing nephesh (soulish) life there were no deaths and population control for all creatures was automatic until sin ruined everything. There were no volcanoes and only orderly geology on our world. There were no asteroids threatening meteorite impacts on the earth or on any planet or moon in the solar system.

There were no jagged mountains created by tectonic plate movements, in fact there were no tectonic plates at all but the lithosphere was a perfectly formed, unbroken shell surrounding the earth and sealing the hot, molten upper mantle safely beneath that protective shell. Volcanoes and lava fountains were unthinkable at that time. Probably some of these benign conditions continued until the Flood. 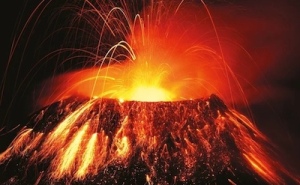 World geology must begin with a perfect world  which colors every conclusion. We must consider the implications of that perfect creation. Evolutionary theory is utterly crushed. It leaves no room for living things being billions of years in development and brings a host of collateral thoughts.

Out of this perfect world then disaster. The history of man descends into ugly moral decline until finally, “Every imagination of the thoughts of men’s hearts was only evil continually.” The whole world was “corrupt before God” and the world was “filled with violence” until God decided to destroy mankind. But Noah found grace in the sight of God. As we acknowledge moral decay as the ultimate cause of the Flood, we must consider today. Is world society ripening for judgment also in our time? As we seek the mechanics for a global flood, we must not miss the “why” of the Flood judgment. After God’s “longsuffering waited in the days of Noah,” His wrath was finally unleashed against a world in rebellion. Meditate on the expression used throughout the Bible, “God’s wrath.” I do not remember ever experiencing real wrath even from wicked men around me. But wrath of man is one thing.

Now contemplate the wrath of God. It is real, it is appropriate, and can be world shattering. Hear Isaiah 24: “For the windows from on high are open, and the foundations of the earth do shake. The earth is utterly broken down, the earth is clean dissolved, the earth is moved exceedingly. The earth shall reel to and fro like a drunkard, and shall be removed like a tent; and the transgression of it shall be heavy upon it; and it shall fall and not rise again.” Isaiah 24 may apply specially to the final end time but it is perfectly appropriate to describe events at the flood of Noah. Yes, a God of overwhelming love, after long, long, long, longsuffering “gives them up” to uncleanness and final, eternal judgment.

Genesis 7:11: “In the six hundredth year of Noah’s life, in the second month and the 17th day of the month, on the same day were ALL the fountains of the great deep broken up and the windows of heaven were opened.”  Amos 7:4-6 explains clearly that “fire proceeded from the ‘great deep’ and consumed the farm land.” It was a potential judgment on disobedient Israel but as Amos interceded, God did not deliver that judgment, but it clearly explains the “great deep” as the source of a column of fire, proceeding from the “great deep” and overrunning the land.  Clearly we can understand Genesis 7:11 as lava fountains from the great deep, certainly not fountains of water.

I have checked with every major Bible believing commentator and all of them without exception think the fountains were water fountains, but I will show that it can not be so. Every one of the creationist authors which I researched had concluded (as I also had for many years) that the fountains of the great deep were water fountains. But no, not by any means – – – they were lava or magma fountains, large igneous provinces like the Columbia basin basalt flows, and hundreds of volcanoes. We see evidence everywhere on our planet. Rather, the “fountains” were lava fountains, external to the earth as well as internal to the earth, extrusions of magma and volcanoes world wide. And that changes everything – – – every approach to understanding the Flood is altered and makes better sense geologically, biblically and evidentially.

Because, to my knowledge, I am alone promoting this view, I regard it as incumbent on me to write as much explanation as I can, even with the limitations of minimal exposure to geology, because my conclusions were derived from the Bible but with abundant assurance from factual geology also.

There are 1500 volcanoes on land areas of the earth. There are thousands of seamounts in the ocean and dozens of utterly massive lava deposits called large igneous provinces (LIP’s) extruded in every corner of the earth and now hardened into basalt rock. Well, where did they come from?

For sure, many Bible interpreters differ widely in their conclusions. Just as in Jesus’ day, satanic forces have attempted to veil the simple Scriptures in confusion. We must admit that all of us have misread some Scriptures and misinterpreted others. Any of us, my self included, are vulnerable to error for sure. So we must love one another without a competitive spirit. Let that sink in for a moment.

Continue reading the full article under the “Geology” heading here: